Salvation is in God's Hands - Part 1

Salvation is in God's Hands - Part 1

This video is from our Gospel Interactions series. Gospel Interactions are the heart behind Goer ministry... demonstrating and communicating God's love, His hope, His message. Goer ministry is planting seeds and cultivating relationships while participating in the community transforming work that God is doing where Goers serve. It’s the personal touch of sharing your story of how Christ has changed your life. We call this “gospel interactions.” Gospel interactions are conversations and acts of service and love motivated by a love for Jesus and done by Goers who have moved into the neighborhood of the unreached.  For more Gospel Interactions stories click here.

Today’s Gospel Interaction story is from Jen. Jen is a Goer alum that spent two years in Cambodia.

The following is a lightly edited transcript of her story.

I worked for an organization called Daughters of Cambodia. Daughters of Cambodia seeks to help women come out of the sex trade. A lot of the issues there are not so much sex trafficking in terms of women being tricked or sold into a brothel. A lot of the girls, especially in this culture, are viewed by the outside public to have chosen this kind of work. But of the ones I’ve spoken with, no one has ever said that she felt like she had a choice.

But of the ones I’ve spoken with, no one has ever said that she felt like she had a choice.

There is a well-known proverb here in Cambodia that says: women are like white cloth and men are like gold. If gold gets dirty, it can just be brushed off and polished. But when white cloth is stained, it stains forever. I heard it said that a mother will tell her daughter, now it is your duty to go into sex work because you can never be redeemed.

When I first got to Daughters of Cambodia, I met with Ruth, the founder, and she was amazing. I wanted to know what were the needs of Daughters of Cambodia. How could my passions and gifts intersect? She told me about their new “Sons of Cambodia” program. It was newer and was made up of a small group of 9 or 10 young ladyboys (That's the English equivalent for the term that they would use) that needed some sort of check-in care.

So we developed an idea of myself and Neet, a local social worker with excellent English, working on this new program together.  We would oversee check in’s with the boys and create a discipleship program. At first, we would just go around to each of them and ask if any of them would like to meet. And then we worked up to a weekly discipleship class where we would go through the Bible with them.

I can remember Neet and I going around, and a lot of the boys were pretty gregarious. ‘Who is this new foreigner from a faraway land? Why did she come here? Do you like to eat rice? You don't eat a lot of rice. Why? What do you even eat?’ I remember when I met Vuti, I got this sense that he was just not really all that interested in getting to know us or these check-ins. I would wonder, “Does he even want us to check in or are we just bothering him?”

However, one day Vuti actually came down the stairs and stopped me and said, “Jenny, are you meeting with people today?” When I told him yes he said, “I want to meet!” So that afternoon, Neet and I met with him. He seemed really nervous. He shared that he was HIV positive, he had AIDS, and he was really scared. He was very scared to tell us, but he said, “I saw you this morning and your smile, and you have joy in your heart, and I'm scared because I don't. I don't want to make you sad, but also I'm just so scared.”

It felt like I was sitting in on holy ground

It felt like I was sitting in on holy ground; it just felt like such a sacred space. I was so honored that he would share that with us because it seemed like it was connected to so much fear and shame for him. I felt so much love and gratitude in my heart. Vuti thought that it was important for us to know because he might need more help and support in going to see his doctor.

Shortly after that, we joined a discipleship class. During the class one day, we were talking about prayer and broke off into small groups. Vuti wanted special prayer, so we broke off into a group with Vuti, myself, the teacher, and another translator.

Those leading the small group asked Vuti what he wanted and he said, “I want my life to be different.” They asked him if he had seen the love of Jesus. He answered, “I’ve heard about the love of Jesus but I haven’t been ready.” They asked if he was ready now. I found myself thinking, “oh my goodness, what is he going to say!” And after a pause he said, “Yes, I am.” Then they looked at me and said, you’re the one who has been living life with him, would you like to pray with him? I said, “Yes, I would!” So Vuti and I prayed together.

Then that night, I got really scared. I started wondering, what if it didn't work? What if he felt pressured by the foreign missionaries? What if he didn't know what he was saying? But then I felt God interrupt me and say to me, ‘Stop trying to figure out what worked or didn't work. Salvation is not your game. I'm the one who knows hearts. You don't. How can you love your brother well? How can you disciple him well?’

Check back soon for part 2!

Photo by Roth Chanvirak on Unsplash

We believe 20-somethings are uniquely equipped with flexibility, energy and skills to bridge the gap in the missions landscape. Finding and placing these “Goers” is the passion of GoCorps. We help Christians invest the first two years of their career in global service. 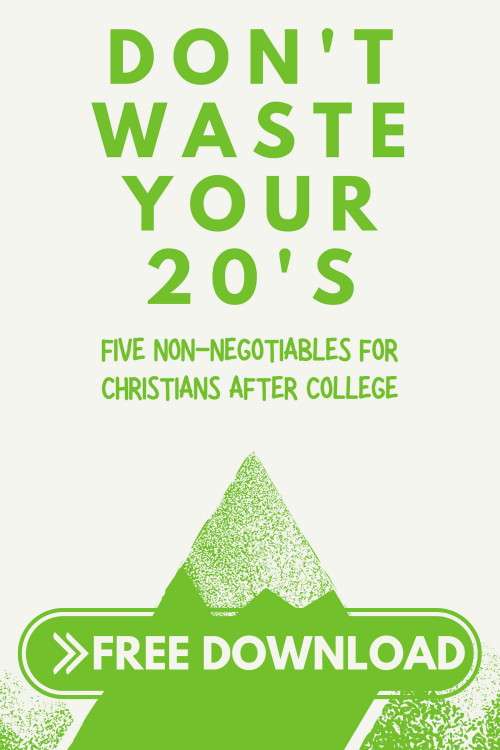 Watch the latest video in our series of stories of Goers sharing the gospel in word and deed as they use their degree and live on mission globally.